With Database Load Balancing, read-only queries can be distributed across multiple PostgreSQL nodes to increase performance.

This functionality is provided natively in GitLab Rails and Sidekiq where they can be configured to balance their database read queries in a round-robin approach, without any external dependencies: 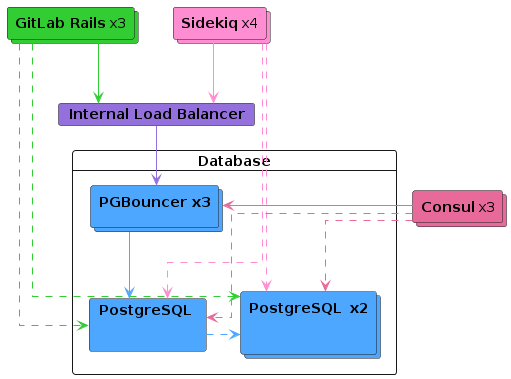 To enable Database Load Balancing, make sure that:

For Omnibus GitLab, you also need PgBouncer configured on each PostgreSQL node to pool all load-balanced connections when configuring a multi-node setup.

Database Load Balancing can be configured in one of two ways:

To configure a list of hosts, add the gitlab_rails['db_load_balancing'] setting into the gitlab.rb file in the GitLab Rails / Sidekiq nodes for each environment you want to balance.

For example, on an environment that has PostgreSQL running on the hosts host1.example.com, host2.example.com and host3.example.com and reachable on the same port configured with gitlab_rails['db_port']:

Service discovery allows GitLab to automatically retrieve a list of PostgreSQL hosts to use. It periodically checks a DNS A record, using the IPs returned by this record as the addresses for the secondaries. For service discovery to work, all you need is a DNS server and an A record containing the IP addresses of your secondaries.

When using Omnibus GitLab the provided Consul service works as a DNS server and returns PostgreSQL addresses via the postgresql-ha.service.consul record. For example:

If record_type is set to SRV, then GitLab continues to use round-robin algorithm and ignores the weight and priority in the record. Since SRV records usually return hostnames instead of IPs, GitLab needs to look for the IPs of returned hostnames in the additional section of the SRV response. If no IP is found for a hostname, GitLab needs to query the configured nameserver for ANY record for each such hostname looking for A or AAAA records, eventually dropping this hostname from rotation if it can’t resolve its IP.

When the list of hosts is updated, it might take a while for the old connections to be terminated. The disconnect_timeout setting can be used to enforce an upper limit on the time it takes to terminate all old database connections.

To prevent reading from an outdated secondary the load balancer checks if it is in sync with the primary. If the data is recent enough, the secondary is used, otherwise it is ignored. To reduce the overhead of these checks we only perform them at certain intervals.

There are three configuration options that influence this behavior:

The defaults should be sufficient for most users.

To configure these options with a hosts list, use the following example:

The load balancer logs various events in database_load_balancing.log, such as

The log is structured with each entry a JSON object containing at least:

Read-only SELECT queries balance among all the given hosts. Everything else (including transactions) executes on the primary. Queries such as SELECT ... FOR UPDATE are also executed on the primary.

After a write has been performed, GitLab sticks to using the primary for a certain period of time, scoped to the user that performed the write. GitLab reverts back to using secondaries when they have either caught up, or after 30 seconds.

In the event of a failover or an unresponsive database, the load balancer tries to use the next available host. If no secondaries are available the operation is performed on the primary instead.

If a connection error occurs while writing data, the operation retries up to 3 times using an exponential back-off.

When using load balancing, you should be able to safely restart a database server without it immediately leading to errors being presented to the users.

Create an issue if there's something you don't like about this feature.
Propose functionality by submitting a feature request.
Join First Look to help shape new features.

View pricing to see all GitLab tiers and features, or to upgrade.
Try GitLab for free with access to all features for 30 days.

If you didn't find what you were looking for, search the docs.


If you want help with something specific and could use community support, post on the GitLab forum.


For problems setting up or using this feature (depending on your GitLab subscription).